We were so happy to see all of you guys supporting Team Esprit and Jeti USA. Thank you to every one of you. Without your support we would not be where we are today.

We are back from Muncie, Indiana! Esprit Model and Jeti USA would like to thank everyone that made IRCHA 2013 the best yet. A special thanks to all our customers who showed their support. We cannot wait until next year! See you then.

Although pictures cannot even begin to describe the sight at the IRCHA Jamboree 2013, here are some pictures we thought captured the sights as best as possible.

Just in case you couldn’t make it, here are some pictures of the Esprit Model / Jeti USA Booth.

We would like to congratulate to the lucky winner of the revolutionary Jeti Duplex DS-16 2.4GHz radio system. The raffle drawing was held the August 3, 2013 at the IRCHA Jamboree 2013 Awards Ceremony.

We wish many happy flying hours to the Lucky Winner. And best of luck to the IRCHA staff for such an outstanding event.

One of the best parts of our work at Esprit Model/Jeti USA is hearing how happy our products have made our customers.  Robert from Anaheim, California is no exception. Here is what he wrote:

“I have been flying R/C for thirty years on the ham band of 53Mhz. When I moved after retiring I joined a local r/c club. Most of the members were using the same brand radio on 2.4Ghz. I really liked the short antennas so I bought their top of the line model. That was two years ago. I have been plagued with hardware problems. There were two recalls on my radio. The last was the worst problem because a bad capacitor was causing the transmitter to send a reboot signal to the radio. This was not a brownout or blackout, it caused all control surfaces to go full throw causing the aircraft to roll over into a dive and crash. After losing $3000 in models it was time to buy a different brand radio.

I was going to buy a Futaba because of their high quality but what sold me on the Jeti Duplex DS16 was that it has two RF modules and four antennas and the receivers have built in telemetry. And the quality of the design makes it a third generation computer transmitter. I have had my DS16 for four months now with dozens of perfect flights. I was so pleased with it that I converted all 17 of my models to Jeti receivers. I love this radio. It is like having a copilot with me giving voice confirmations of what switch I threw and via telemetry what the status is of different flight conditions. I know exactly when my flight LiPo battery is at 80% and it’s time to land. I never have to take my eyes off of my model. But best of all, I never have to worry about a loss of signal again.”

Being that Robert was the only one at his club with the radio, and there were many questions to be had, he found a creative way for the radio to do all the talking. Here is a transcript of the wave file that plays whenever someone asks a question.

“Hello pilot. I am the Jeti duplex model D S 16. I am called duplex because my receivers have built in telemetry for two way data flow. For safety I have two internal transmitters each with a horizontal and vertical antenna hidden inside my display mount. My large screen can be custom arranged in small or large font to show whatever data you wish. But there is no need to look at the display because I can tell you the status of any function. I am a third generation computer transmitter where all my switches can be assigned by you for any purpose. I have toggle switches, proportional switches, logical switches, tilt switches and sequencer switches. Every time you move a switch, I can voice confirm what you just did. You never have to take your eyes off your plane. I can give you gun, missile and bomb drop sounds to make your flying more realistic. I can tell you the name of your model when you power on or change planes. I can provide all the specifications about the model and the real aircraft. With my sensors I can accurately tell you when it is time to land when your battery nears 80% use and give you a countdown time. Your aircraft will be safe with me.”

We are happy that you enjoy your Jeti system Robert! Thanks for the feedback.

It’s summer and what better way to enjoy it than a sale on your favorite things. Get 10-15% off on names like Hitec, Scorpion, and much more. Take a closer look. 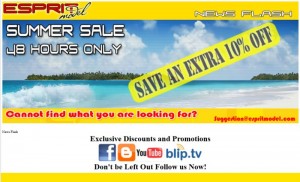 Jeti USA and Esprit Model would like to congratulate Bobby Sellers in Fort Worth, Texas for winning the DS-16 at the 2013 IRCHA air show. We are sure much enjoyment will come from your new Jeti transmitter. Have fun! 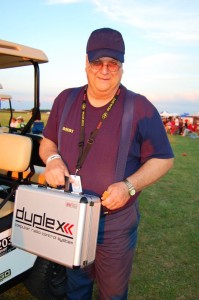 The Pulsar 2S Pro Competition is the latest addition to the ever-growing Pulsar family of hand-made competition/sport sailplanes. Take a closer look!