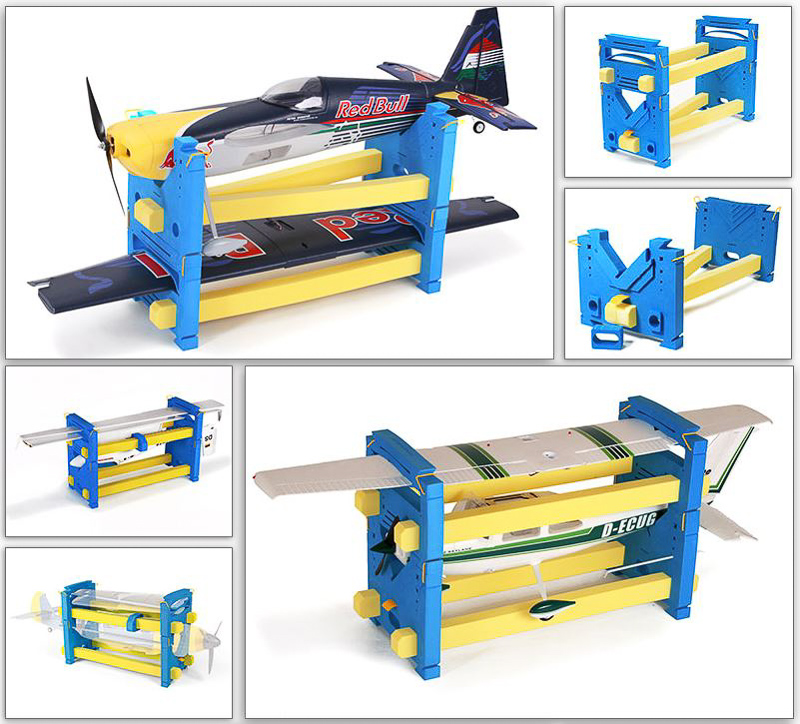 The entire Standbox System family is available at our site.

Transport:
StandBox makes airplane transportation safer, whether riding in the car’s trunk or while carrying the plane with the help of the attached carrying straps. Thanks to its dependable and flexible construction, there is no need to worry about possible damage which could be done to the model airplane during transportation.

Storage Solution:
StandBox effectively organizes your fleet of R/C models. Due to StandBox’s dovetail joints and clips it’s possible to stack them up on top of each another (Max 5ft./1.5m). The StandBox dovetail locking joints protect your models against horizontal and vertical sliding. The StandBox system effectively manages your storage space.

Intelligent Flexibility:
You can adapt StandBox easily and quickly to your airplane by using a snap blade knife (recommended blade width is 18mm). Thanks to StandBox’s dovetail locks, the whole structure is easily adaptable. The StandBox joining support structure uses round corners which provide greater pressure points within individual the connections. More pressure equals stronger joints! Prism and vertical support make all the connections strong without use of the glue. Because the Standbox system uses no glue it can easily be rearranged at any time.