Not everybody learns about the RC Hobby through a friend. Michael Middleton did not. Instead, he was always captivated by flight and the craft itself. This wonder led him into the RC world, a place where he could follow his imagination and interest in  the wonders of flight on a small scale level. He started off building small, two channel models, and attempting to fly them himself. Through a very hard “trial and error” process, Michael began to grasp the techniques required to keep his aircraft in flight.

Shortly thereafter, Michael’s career took him to Las Vegas, where he became acquainted with a local hobby shop owner. From there he was introduced to pilots of a higher skill level, who coached him to multiple south west area event wins and placings, as well as AMA F3A district champion twice.

Michael currently is a member of IMAC, and Prop Nuts R/C Club, and enjoys flying full sale aircraft. ” I enjoy mentoring and coaching aerobatic and scale fliers, and flying all types of fixed wing aircraft as well as setting up RC control and power systems.” States Michael. Welcome to the team Michael! We are happy to have you. 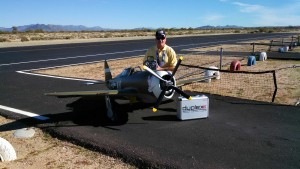