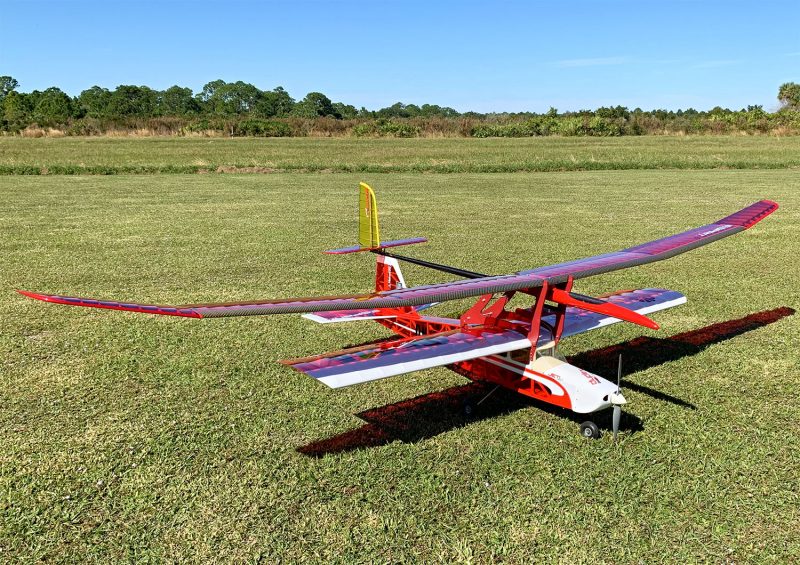 Our new sailplane launching platform allows you to reach optimal thermal hunting altitudes without the expense of a winch or the hassle of a high-start.

Great for clubs that do not have the space for traditional sailplane launch systems. The platform is made from a 6mm carbon/lite-ply sandwich and mounts to your favorite, 70″ (1780mm) or larger, high-wing model. Find it at our website, here.

Step 1:
Install the mounting brackets that attach directly to your airframe (If needed install fuselage reinforcement plywood/CF plates). The upright portion of the brackets should be 1/8″ (3mm) behind and ahead of the trailing and leading edges of your wing.

Step 2:
Trace the airfoil of the airplane you intend to mount this to onto the side frames of the launch platform. We chose to cover the lower portion of the frame with masking tape so that the marks would show up. Be sure to align the bottom of your airfoil to the bottom of the side frames, as this is critical.

Step 5:
Stack the side frames together using both horizontal supports to keep them aligned. Drill three holes in the frames for the three M4 x 230mm support rods. The location of these holes is not critical. Position rods to avoid any contact with fuselage of the launch airplane or sailplane.

Step 6:
Attach the side frames to the four mounting brackets using the included M4x20mm bolts, nuts, and washers. Add the three support rods in their previously drilled holes. Slide the two horizontal supports into the recesses cut in the frames. You can now align the platform onto the horizontal supports and attach the using mechanical fasteners like screws or bolts (Not Supplied). Hook attachment hardware is included with “Tow Hook Release” so do not forget to add it to your shopping cart.

Step 7:
Align the tow hook release on the center of the platform. It is critical that this to be placed in the center and forward of the platform to insure that you get the best attachment and smooth release of your sailplane. Once aligned, you can drill the four holes needed to mount the release. You will now line up and mount your linkage, wire release cable and servo. Make sure when adjusting the tension of the release cable that sailplane is firmly secured to the launching platform as well as pulled forward. Leading edge of the wing has to be aligned against the front platform stops.