At a young age, Rich Miller became engulfed in the world control line.   After a couple of years it was time to give RC flight a try.  He and a buddy decided to learn on their own, starting with a Carl Goldberg Falcon 56 fixed wing airplane.  Since then Rich has tinkered with many different models. There have been nitro sport planes, scale models, twin engine aircraft, electrics, gassers, and even helicopters. In 2005, Rich picked up a turbine jet and fell in love. Along with a wide variety of aircraft, he has tinkered with many different flight systems.  His first radio was a World Engines Expert, followed by a Kraft, Hitec, Futaba, and now Jeti. After having seen the Jeti DS-16 first at Joe Nall two years ago and again at the Weak Signals in Toledo, he knew this was the radio for him.   “[I] look forward to the 2015 RC season. [I will be] attending Jet events and showing off the DS-16 to all who are interested.” states Rich. Welcome to the team! 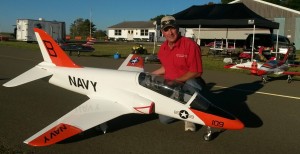