Dean Lampron, an 18 year old from Massachusetts, has much to talk about. As a young boy Dean raced motocross bikes. Around the age of 12, he decided to stop racing and picked up a radio. With his father as a great role model and teacher, it did not take him long to get the hang of flying. By 2007 Dean was competing in pattern. After a few years of pattern flying, Dean switched to giant scale. “The thing that draws me to giant scale airplane is that they look like real planes and they have such a nice presence in the air. I’ve been flying giant scale since 2009 and have flown countless numbers of different airplanes.”
At Joe Nall 2013, Dean met several amazing people, and became introduced to the world of IMAC. After a summer at Clover Creek Summer Camp Dean was ready! Last season he flew at the intermediate level and will be moving up to advanced level for 2014. Welcome to the Team Dean! We are happy to fly with you. 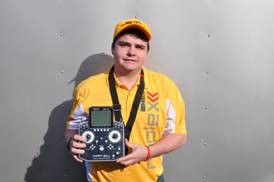