Bob Belluomini is a man of many skills. He started flying at the age of 11, beginning with control line and free flight models. In 1969, Bob flew his first RC aircraft. During his college years, he focused on pattern, and then moved into helicopters, where he flew competition and FAI Heli events. Bob’s current discipline is EDF and high powered electric models.

Along with an extensive background on various different aircraft, has dove head first into his local flying community. He has belonged to the Greater Cincinnati Radio Control Club since 1975, and he recently joined the Ohio River View R/C Flyers Club. As a founding member of IRCHA, he has help manage the event during the years it took place in Columbus, OH. In addition to past events, he plans to manage Ohio River View R/C Flyers Club’s first ever Electric Ducted Fan meet. 2015 will also be his third year hosting the EDF Jet Jam. Bob’s current flying takes him to numerous jet events throughout the year, so keep an eye out for him on the field!

Welcome to the Team Bob! 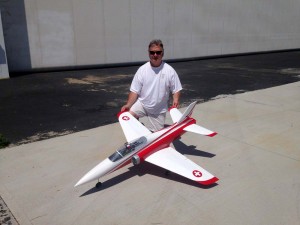