This update brings additional options for digital inputs and outputs to the Central Box 200. Now you can simply control your LED lights using the Central Box only. The Central Box can function as an EX Bus expander so you can join several Central Boxes together and you’ll have perfect signal distribution and control redundancy in a model.

The 1.20 firmware version for the Central Box 200 adds a digital interface function to the existing settings for the output pins. Individual Central Box 200 outputs can now be configured as one of the three modes; classical servo output, digital output or digital input. In the digital output mode, only the logical level 1 or 0 is generated on the port configured this way. The value of this output is reflecting the assigned output channel and its level. If the servo position of the specified receiver channel is lower than 0%, i.e. 1.5ms (the decision limit point can be set by the user using the „Trigger“ parameter), the output is set to permanent log. 0 (i.e. 0V). If the servo position is higher than 0%, log. 1 (i.e. 3.3V) will be generated on the pin. In the digital output mode, no control servo pulses are generated for that particular pin. 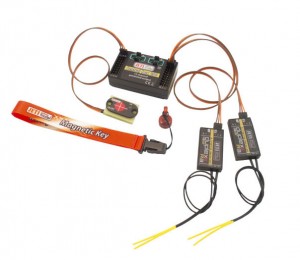